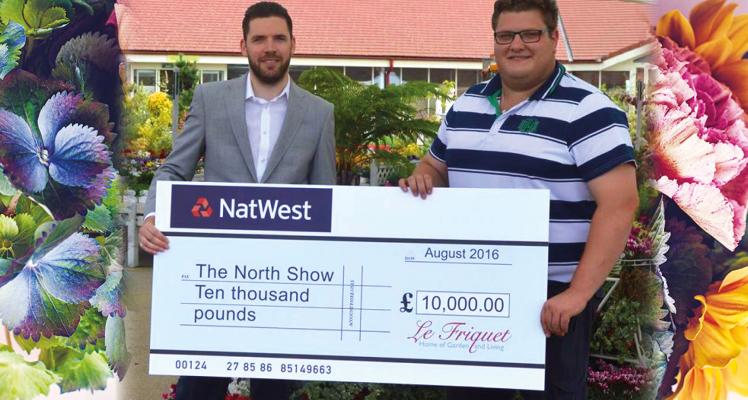 Le Friquet Garden Centre are proud to announce a donation of £10,000 recently made to Guernsey's beloved North Show! This has been raised through donating 10% of all outdoor plant sales in recent weeks.  'We're very proud to be supporting the North Show this year as it's such an important summer event in Guernsey's diary', says Garden Centre Manager, James Robin.

Vice President of the North Show Committee, Josh Gabriel, along with North Show Committee President, Gary Trimbee-Laine, are thrilled to have Le Friquet's support this year, along with other local companies and the Guernsey public.  In line with this initiative, Le Friquet Garden Centre has also recently launched a new look plant area, which showcases its seasonal as well as its hardy plants on brand new raised sleeper beds - a display which offers a broader view of the centres wide range of plant stock.  The North Show, which will be held on 24th and 25th August at Saumarez Park, will have all the much-loved events including a range of local and UK entertainment for all of the family. Not forgetting fur and feather entries, flower arrangements and a Meat Draw. The regular favourites will also be there including a fair, spectacular fireworks and, funds permitting, the popular Battle of Flowers.   For more information on the events of the North Show, visit www.guernseynorthshow.org.gg.