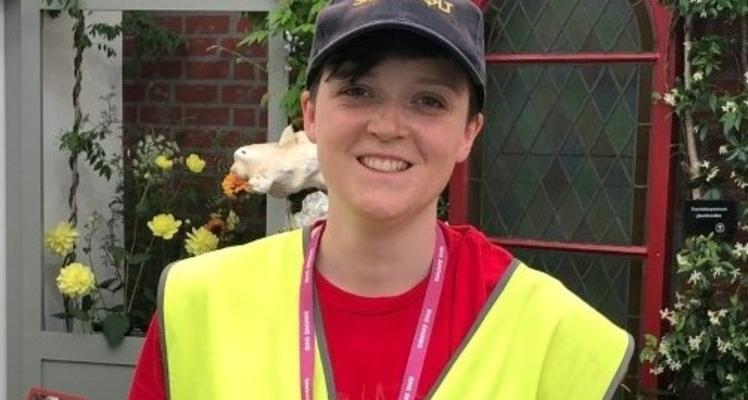 Having the Blue Diamond Scholarship made finishing my college course simpler. I was able to focus on my work and my qualification, rather than the cost of tuition and tickets. Part of my scholarship was used to contribute towards the tuition fees for my college course.

I finished my course at Sparsholt College Hampshire this summer and received my results on Thursday 18th August. I achieved an Advanced Technical Extended Diploma in Horticulture with Distinction*. I am proud of this, as I went into this course with the intention to get everything out of it that I could and my result reflects this. In the last term of college, I was able to be involved in a number of very exciting projects.

The first of which was the “Home from Home” garden at the RHS Chelsea Flower Show 2022, in support of Maggie’s Southampton. My role in the project was Head of Plants. I was in charge of raising 2000 plants for use in the garden as well as choreographing part of the planting for the show. I was also heavily involved in the construction of the garden, building a water feature out of flint and creating the backdrop of the garden to mimic a brick wall. As part of the show, I got to work with representatives of Maggie’s Southampton to understand their charity, how they support people with cancer and how we could represent that within the garden. The garden was awarded a Silver-Gilt medal and I am delighted as this reflects the level of care and attention that was put into the design and execution of the space. But for me, the highlight was the conversations I had during the show week with the public, about their experiences of cancer, of gardens and of how even in struggle, there are beautiful things to be discovered.

Through college, I also had the opportunity to redesign and build a section of the historically inspired garden of King John’s House in Romsey. The existing garden was a medieval herber and the garden volunteers found it was not working for the space. I was asked to create an alternative design concept that could be implemented to replace the existing garden. I was inspired by the medieval building of King John’s House and decided to put together a physic garden centering around the four humours. Once the design had been finalised, I then led a team of students in site clearance and initial construction of my design. The garden was then handed over to the volunteers to complete and make their own.

During the last term of college I was also able to obtain two of the three tickets I was hoping for, following the receipt of the Blue Diamond Scholarship from the Colegrave Seabrook Foundation. The first ticket was for ride-on mowers and the second, hedge-trimmers. I am still seeking to complete the pedestrian spraying qualification PA1-PA6. I was unable to do this during my last term of college due to staff shortage. I have just received news that I have been selected to receive the Chartered Institute of Horticulture (CIH) Pam Pointer Award, in recognition of outstanding achievement in academic and practical pursuits. I was nominated for this award by my tutor for my performance at college, particularly my independent project based around the effect of plant cultivation on nectar guide markings. As part of this award, I will be able to attend the CIH Conference in Edinburgh in October.

Since leaving college, I have started work as a Horticulturist at Jekka’s. Jekka’s is a nursery in Gloucestershire that grows around 500 varieties of culinary and medicinal herbs. In my job, I cover all aspects of nursery work, including watering, potting and propagation. I am finding the work to be interesting and I am learning a huge amount from my fellow colleagues, and my manager, Jekka. My next steps are to talk to my workplace about having time to complete the spraying qualification. I look forward to working at Jekka’s over the coming years to develop my nursery skills.

In 2021 The Blue Diamond Scholarship was launched to support students of Horticulture.  Read more: https://colegraveseabrookfoundation.org.uk/scholarships/blue-diamond-scholarship/