Seeing a swathe of snowdrops is one way to brighten the winter months.

Despite the cold, these hardy little flowers can be found thriving in pastures, woods, ditches and orchards just about everywhere! After a long winter their brilliant white petals and green leaves are a welcome sight, signalling the growth of new life.

Snowdrops' scientific name is ‘Galanthus’, which translates as ‘Milk Flower’, but over the years they’ve gained other names such as ‘February Fairmaids’ and ‘Candlemas Bells’! 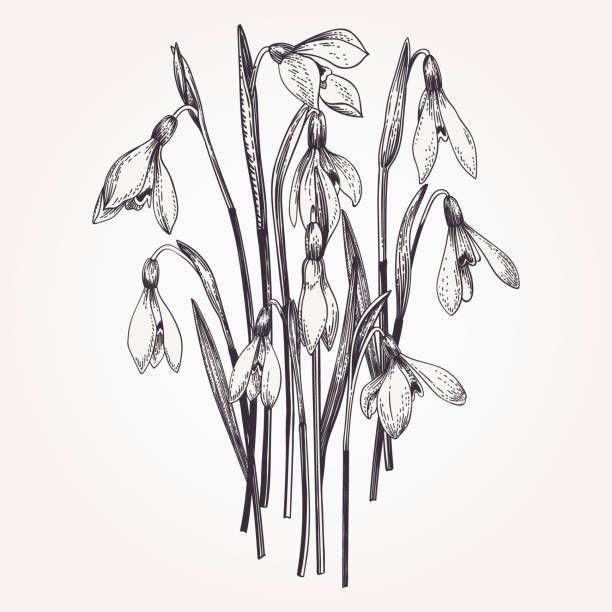 History of the Snowdrop

Originally believed to be a wildflower native to Britain, the snowdrop is actually native to Europe and the Middle East. It was brought to Britain by the Romans.

It is a small genus of about 20 species of plants in the Amaryllidaceae family. They have been known by other names in early history. However, it was Carl Linnaeus, a Swedish botanist, who named the snowdrop the Galanthus nivalis, “milk flower of the snow,” in 1753.

It has been introduced into other areas outside of Europe and the Middle East where it has naturalised.

A Moldovan legend describes a fight between Lady Spring and Winter Witch; details show that at a point in the battle Lady Spring cuts her finger. The drop of blood melted the snow and a snowdrop flower grew. The pure white flower was a sign of Lady’s Spring’s victory over the Winter Witch. 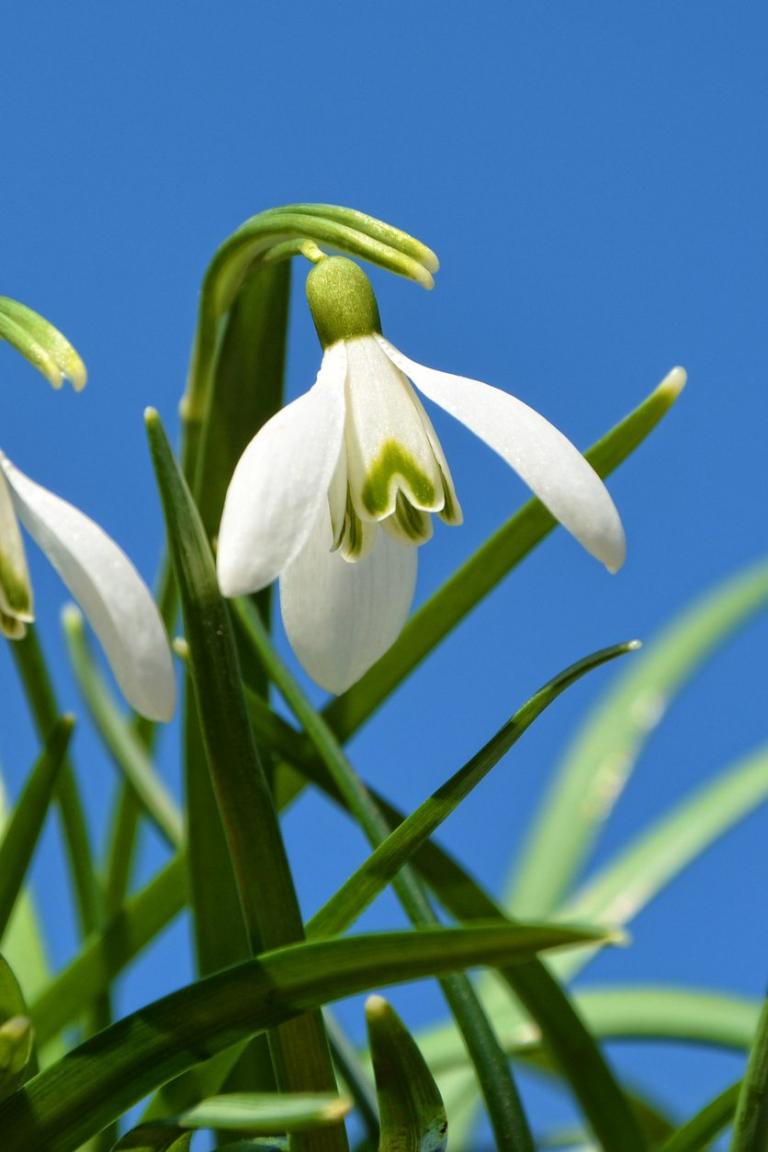 The snowdrop is a perennial which is part of the amaryllis family. The small plant reaches a maximum height of 3 to 6 inches. It is the first of the spring flowers to bloom generally before or coinciding with the vernal equinox at the end of March. Snowdrops produce one small white flower which droops its head toward the ground. When the flower opens it has three inner petals that are covered by three outer petals. The head of the flower will collapse in freezing temperatures and reopen when the weather gets warmer.

The leaves of snowdrops are bluish-green and long and slender, much like blades of grass. They emerge from the bulb enclosed in a sheath. The position of the leaves to each other as they come out is based on the species of plant. The leaves may appear pressed against each other, or pressed against each other with the edges curled out, or one leaf is tightly rolled around the other. At one time this feature of the leaves was used to differentiate between the species but it proved to be unreliable and is no longer used.

At Wimpole snowdrops and aconites can be found throughout the Pleasure Grounds and will be looking their best in February. Why not brighten up a dull winter day with a walk to see them.

Most of Hardwick's snowdrops are clustered in the east and west corners of the South Court. Under the bows of the yews and lime the snowdrops appear to almost glow. Following on from the flowering cyclamen and before the deep purple crocus, the display of snowdrops is a special time of year.

From early February, the snowdrop season at Chirk Castle is our traditional way to dust off the old year and embrace the new. With a beautiful white carpet of snowdrops throughout the Pleasure Ground Wood, including some rare species, and also patches of snowdrops across the wider estate, there's plenty of space to wander and find the perfect viewpoint or photo.

Our collaboration with the National Trust will focus on conserving plants from their collections, including snowdrops. We will work with growers to procure and protect unique varieties, so they can be grown and sold for the enjoyment of everyone.

Through sales generated from the National Trust Collection by Blue Diamond, a minimum of 10% of the retail sales price per product will be given to the National Trust to help look after nature, beauty and history for everyone, forever.

A selection of varieties currently found in National Trust gardens, and available to purchase instore now: 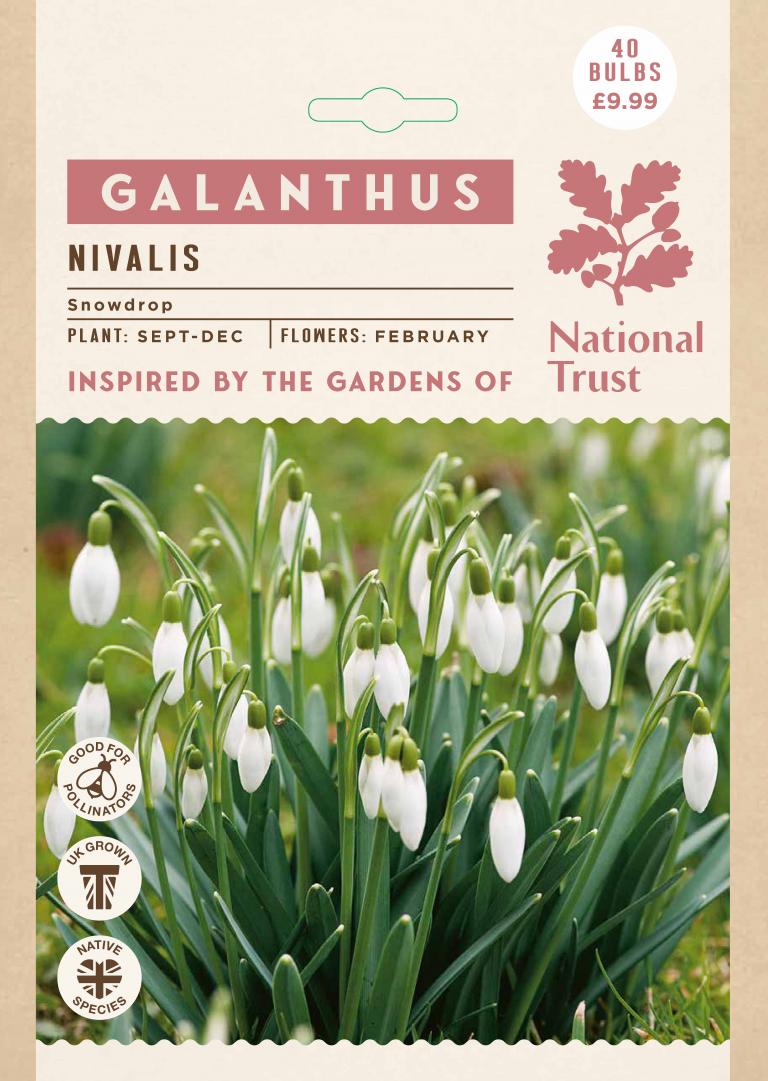 A flower bulb easy to naturalise and easy to grow in moist soil. Plant in large drifts or in pots.

Native to the UK No

Potentially harmful Ingestion may cause mild stomach upset, contact might irritate skin. Wear gloves and other protective equipment when handling 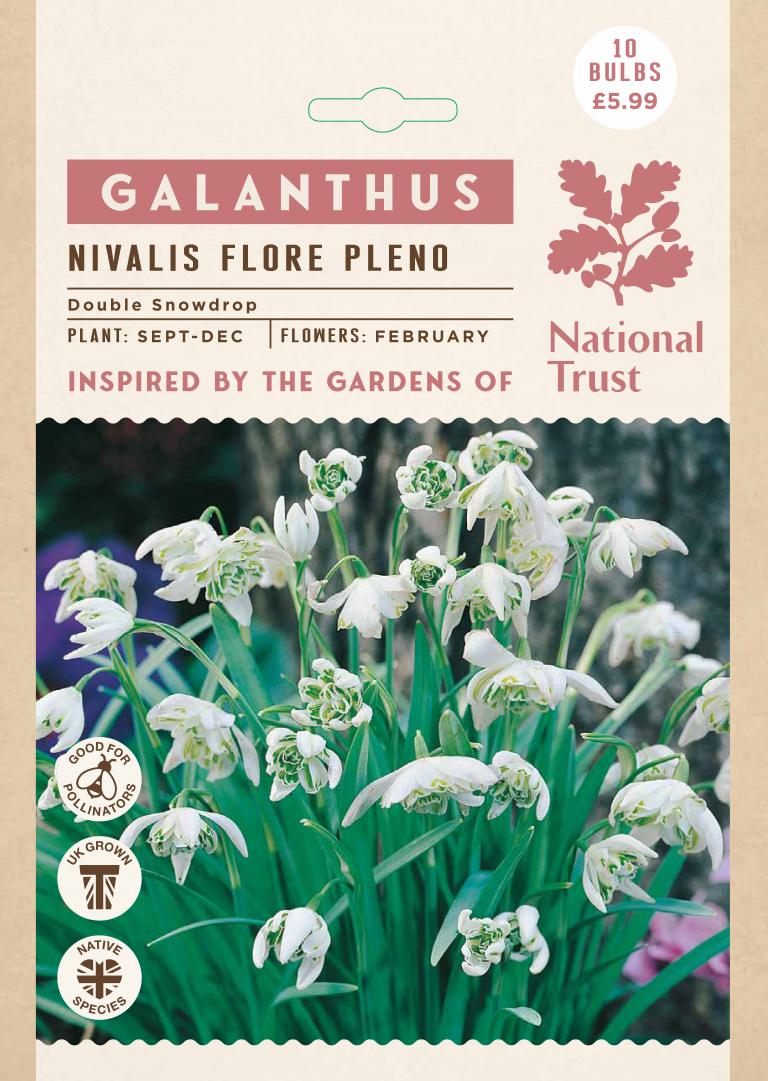 An outstanding variety that is happy when planted under trees and shrubs.

Native to the UK No

Potentially harmful Ingestion may cause mild stomach upset, contact might irritate skin. Wear gloves and other protective equipment when handling

Flowering between January and March, snowdrops are one of the first signs of life in gardens after the long winter months.

Our garden experts take great care of these delicate little blooms, and now they’re passing on some of their favourite facts and top tips so you can create your own mini carpets of snowdrops at home.