Director of the Year Award 2021 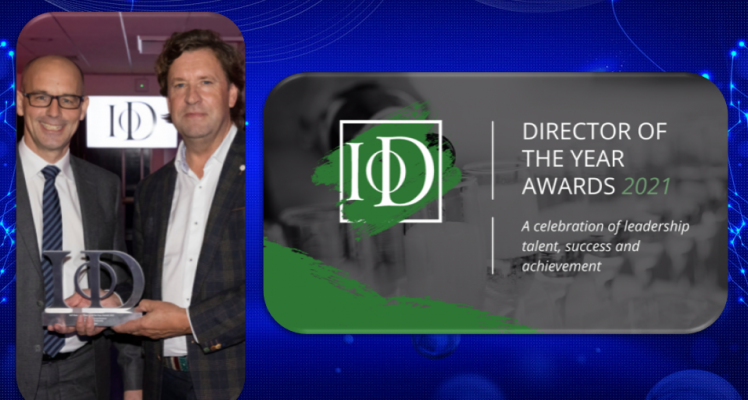 The Institute of Directors (IoD) in Guernsey has announced that Alan Roper, Managing Director at Blue Diamond Group is the winner of this year’s IoD Director of the Year Awards, sponsored by JT.  The winners were celebrated at this year’s IoD Guernsey Annual Convention.

Roy McGregor, the Director of the Year Award’s coordinator, said: ‘The calibre of the winners’ submissions was of a brilliant quality. I’m very pleased that the winner represents the best of Guernsey directors.

‘Guernsey has some of the finest directors I know and it’s important they get recognition for their efforts.  I would like to thank everyone who supported and entered this year’s awards and the judges who gave up their time to help.’

The IoD Director of the Year Awards were set up to recognise excellence in leadership, proven governance skills and the individual's positive impact on the culture and success of their organisation.

Daragh McDermott, Managing Director at JT Channel Islands, the sponsors of the Director of the Year Awards, said: ‘The role of leaders is constantly changing and evolving - just like the world around us, which is why JT are pleased to support this important award.  Leadership brings many challenges, and success is built around a leader’s ability to adapt, enable and empower their team to achieve collective and individual goals. The winners of this award demonstrate those skills which clearly have been central to their success, alongside a level of confidence, commitment and ambition which then followed through in their business strategy and values.’

The large business award was presented to Alan Roper, as it was evident that he directly contributed to an increase in turnover and profitability across the Blue Diamond Group. He also utilised his deep industry knowledge and leadership skills to inspire and retain their local, loyal workforce.

The Director of the Year Award’s judges consisted of Stuart Falla MBE, Carol Goodwin, Roy McGregor, Gordon Wilson and Charlotte Denton. All have extensive experience across a variety of sectors.