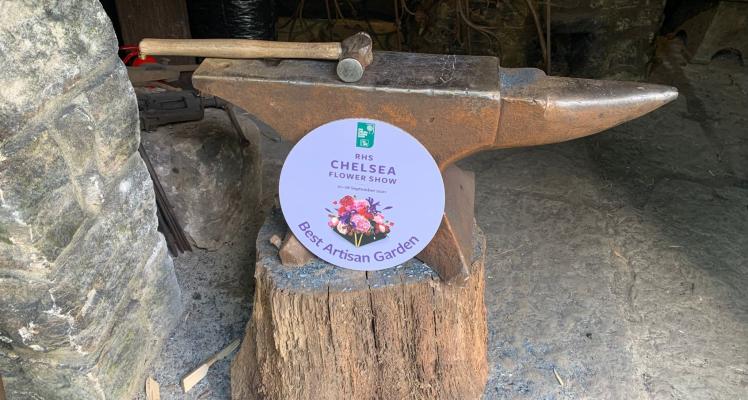 The Blue Diamond Forge Garden was awarded Best Artisan Garden at the RHS Chelsea Flower Show 2021 yesterday along with a Silver Award. This is a tremendous achievement for the Blue Diamond Group not least as it is the first time that the Group have exhibited at RHS Chelsea.

Managing Director, Alan Roper was delighted with the awards and said;

“RHS Chelsea has provided us with a fantastic opportunity to showcase the talents within the Blue Diamond Group. Our Garden was originally thought up and designed by employees within the Group who have then worked closely and had excellent support from Conquest Creative Spaces and Project Consultant, Cherry Carmen, to bring the Blue Diamond Forge Garden to life. I am delighted with how the Garden looks and I have already had many complimentary comments from visitors to the show about the Garden with many saying that they cannot believe that Forge was built in only 2 weeks, its authenticity making it appear to have always been in the grounds of Chelsea”.

The Blue Diamond Forge Garden is situated at site 565 and celebrates the artisan craft of Blacksmithing, inspired by the National Trust’s Branscombe Forge in Devon, which dates back to the 15th Century.

The Garden features a thatched roof forge and bespoke, handcrafted pieces of metal work created by the resident blacksmith at Branscombe Forge, Simon Hall, who kindly agreed to help the team at Blue Diamond on their show garden journey and is spending time at the Forge Garden this week until Thursday, demonstrating his craft.

The garden demonstrates the modern work of a blacksmith and how metal work has evolved over time from fish hooks to sculptures and garden art, the present-day blacksmith often taking inspiration from the nature they see around them.

The naturalistic trees give structure to an informal planting scheme but blends wild plants and more ornamental varieties. The colours in the leaves and flowers mirror the colours associated with a working forge, the flames, embers and soot.

There is a stream that runs from the front to the side of the garden, water being an important part of a working forge and so allowing the blacksmith it fill the quench bowl inside the forge from the trough outside.

The Blue Diamond Forge Garden will be rebuilt in its entirely after the show at Bridgemere Show Gardens (part of the Blue Diamond owned Bridgemere Garden Centre), in Nantwich Cheshire where it will take its place alongside other RHS Award Winning Gardens.